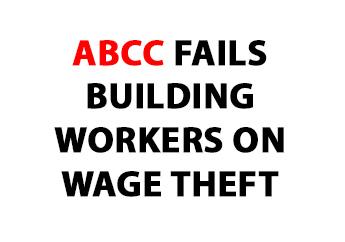 The Australian Building and Construction Commission is an abject failure, especially when it comes to recovering unpaid wages and entitlements.

That the ABCC is boasting about recovering some $1 million since 2016 only highlights the fact that this is a body solely designed to smash unions, not protect workers’ rights, CFMEU assistant secretary Jade Ingham said.

“This is a joke. The level of wage theft in Australia has now topped $500 million – and that is only what has been publicly declared by the likes of Woolworths, Bunnings, 7-Eleven, Caltex, Dominos and a host of other corporate brigands.”

“Wage theft, and the underpayment of entitlements, is endemic in the building industry. In the past 10 years the CFMEU Queensland & NT branch has recovered more than $30 million for its members, and in August alone we recovered nearly $1.5 million in unpaid superannuation and other entitlements.”

“Set this against the ABCC’s performance, and then consider this sum is just a fraction of the $4.6 million they blew on legal fees in just the past year. They are simply a taxpayer-funded protection racket for bad bosses and ideologues.”

Mr Ingham said the so-called Fair Work Commission was woefully underequipped to tackle the economy-wide problem of wage theft, and the failure of regulatory oversight underscored the need for a strong Australian trade union movement.

“Since John Howard’s introduction of union-busting laws, unions have limited rights to enter a workplace and inspect pay records of members to ensure compliance. The removal of this sort of basic oversight and employee advocacy is largely to blame for the wage theft crisis now unfolding,” he said.

“If you strip workers of their voice, and try to criminalise organised labour, this is the disaster you reap.”

“Crossbench Senators need to bear this at front of mind as the Morrison government tries to push through its next wave of anti-worker laws. Do they support ordinary working Australians and the principle of a fair go, or are they rubber stamps for the right wing of the Liberal Party and their big corporate donors?”