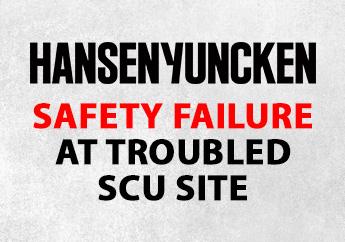 ROGUE builder Hansen Yuncken is still displaying a callous disregard for safety just a week after a worker on its Sunshine Coast University project at Petrie had his leg badly mutilated.

Workplace Health and Safety Queensland inspectors were forced to intervene again this week after another incident involving the unloading of a truck. The area is subject to another non-disturbance order, and all unloading of vehicles by forklift has been banned while investigations continue.

“This just beggars belief,” CFMEU assistant secretary Jade Ingham said. “Last week they nearly killed a man, and they have clearly learned absolutely nothing when it comes to managing basic site safety.”

The latest incident involved yet another heavy load failure and only good luck prevented another serious injury or worse, Mr Ingham said.

“There’s a worker still in hospital and facing more rounds of surgery to save what remains of his leg, and these clowns continue to behave as if nothing is wrong at this bombsite of a construction job.”

“This is a project that is underwritten by more than $100 million of taxpayers’ money. Yet the lead contractor is determined only to take as many shortcuts as possible to inflate profits, and damn the consequences for the men and women working on the site wondering if they will be going home at the end of a shift.”

“We’ve got a federal government trying to ram through draconian anti-union laws that will strip workers of representation, while bankrolling the activities of predatory builders who view workers as little more than expendable items on a balance sheet.”