DISASTER WAITING TO HAPPEN AT LOGAN 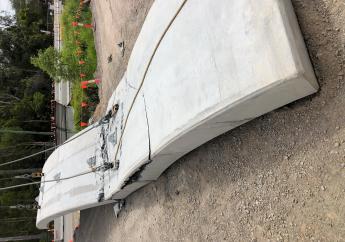 The Logan Enhancement Project at Stretton is a catastrophic accident waiting to happen unless there is an immediate suspension of installation of pre-cast concrete sections, accompanied by a full safety audit.

The integrity of 20 precast components used in construction of an arched bridge for an environmental corridor is in doubt following the structural collapse of a major segment.

Government inspectors were called to the CPB Contractors site at site at Illaweena Street after a curved 20 meter long, 19 tonne precast element developed cracks while being lifted and eventually failed.

While WHSQ have issued a stop work notice prohibiting any further lifts, and a non-disturb notice to enable engineering specialists to investigate, a full audit is required, the CFMEU said.

This latest pre-cast incident follows the death of two construction workers who were crushed under 14 tonne concrete panels at the Eagle Farm racecourse in 2016, and numerous near misses involving precast elements.

CFMEU President Royce Kupsch said the introduction of industrial manslaughter laws in Queensland has done little to calm down over-zealous builders and developers trying to achieve unrealistic and sometimes unsafe construction milestones ahead of the Christmas break.

CFMEU officials, along with WHSQ specialists are continuing investigations, but in the meantime it is imperative that workers’ lives are not endangered, Mr Kupsch said.