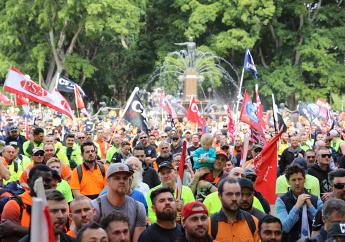 The CFMEU National Construction Secretary Dave Noonan has condemned threats by the ABCC to fine construction workers up to $42,000 for participating in next week’s Change the Rules political protests.

The ABCC has issued an email to employers about the political protests around the country next week, advising that workers must seek their boss’s written permission to participate, and that they could face fines of up to $42,000.

The union has described the action as a blatant attempt to frighten workers off attending the political protest.

“Australian workers have a right to stand up for themselves,” Dave Noonan said.

“We don’t live in a dictatorship. People have the right to attend a peaceful protest.

“Trying to threaten workers with the prospect of massive fines is clearly an attempt by the partisan ABCC to intimidate construction workers into silence.

“Workers who want to protest stagnant wages, rampant wage theft, and erosion of rights and conditions should not have to live in fear of a massive fine.

“This latest from the ABCC perfectly illustrates why the political protests are needed – because the rules are well and truly broken when workers can’t stand up for themselves.

“If Scott Morrison’s Government was as tough on banks as it is on construction unions, the banks may not have committed thousands of criminal acts.”