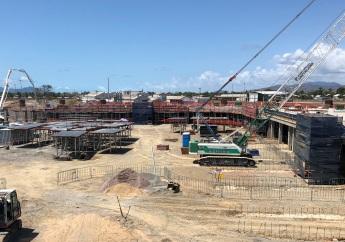 Construction giant Watpac has proven itself unfit to continue as lead contractor of the $300 million Townsville stadium project, and must be removed, the CFMEU said.

CFMEU state secretary Michael Ravbar said the patience and goodwill of workers and subcontractors on the project had been exhausted, and the government must intervene immediately to put an end to Watpac’s lies, intimidation and stand-over tactics.

“What you have is a company that is so desperate to recoup losses it has racked up elsewhere, that it is prepared to mislead and underpay everyone involved in the project and then put its hand out for even more money.”

“This is nothing short of a taxpayer funded extortion racket, where subcontractors have been threatened and intimidated to cut corners and costs, and you basically end up with wage theft by stealth.”

Mr Ravbar stressed that the stadium project, if managed properly, was one that should provide good wages and conditions for workers, at the same time as leaving a lasting legacy through local procurement policies and requirements to train the next generation of skilled construction workers in north Queensland.

“Contractors have been tendering for work blind, not even knowing the legal requirements attached to work being bid for, because Watpac - an arm of Belgian multinational BESIX - has kept them in the dark and fed everyone bullshit.”

“And we have allegation that contractors are being asked to quote using the workplace agreement conditions, and then told to pay workers under another, lesser, arrangement.”

“The government have been hoodwinked by a lowball tender and are now on the hook for even more money, taxpayers’ money which should be going to Townsville, not Brussels.”

“This is the sort of corporate thuggery that should not be rewarded through massive government contracts, where, over the course of three different ministers and various bureaucrats, there would appear to have been little oversight and even less due diligence.”